The Sundolphin Is A Great Little Kayak, Read My Review Below To Find Out More

Recreational (or “rec”) boats are synonymous with low-cost, big box retailers (we won’t mention any names, you know who they are). These kayaks are cheap, flimsy, and something you’d probably be selling on Craigslist after a year, once you get a little more experience and money. It’s unfortunate that many people buy these boats, because all paddlers need comfort and ease of use, no matter their experience level.

But the Sundolphin Aruba 10 breaks the stereotype of the rec boat wide open by providing all types of paddlers with a an easy to use boat that provides a great paddling experience at a reasonable price. This Aruba 10 review lays out why this kayak is one of the better rec boats on the market.

Rec boats are less expensive, easier to use, and quite often shorter than their touring kayak counterparts. Their primary markets are people who are just learning the sport, those who don’t go out very often, and those who don’t paddle in any kind of hazardous conditions. They don’t come with a lot of bells and whistles or the more technical design that would be necessary for rough waters.

Thus it might seem like the biggest concern in buying a recreational kayak is price – nobody wants to spend too much on boat that can only be taken out in the calmest of waters or that they might get rid of in a few years. But that’s shortsighted, and doesn’t give enough credit to the sport of recreational kayaking – rec boats are less expensive than touring kayaks, but it’s still important to get a comfortable one with a good design because you want the experience to be fun.

The second most important consideration for rec boat users is ease of transport. If you’re new to the sport, a heavy and unwieldy kayak is going to be a big hurdle to getting out on the water. You want something that’s light and not too hard to transport on your own (can’t always count on buddies when you want to squeeze in a quick after-work paddle!). 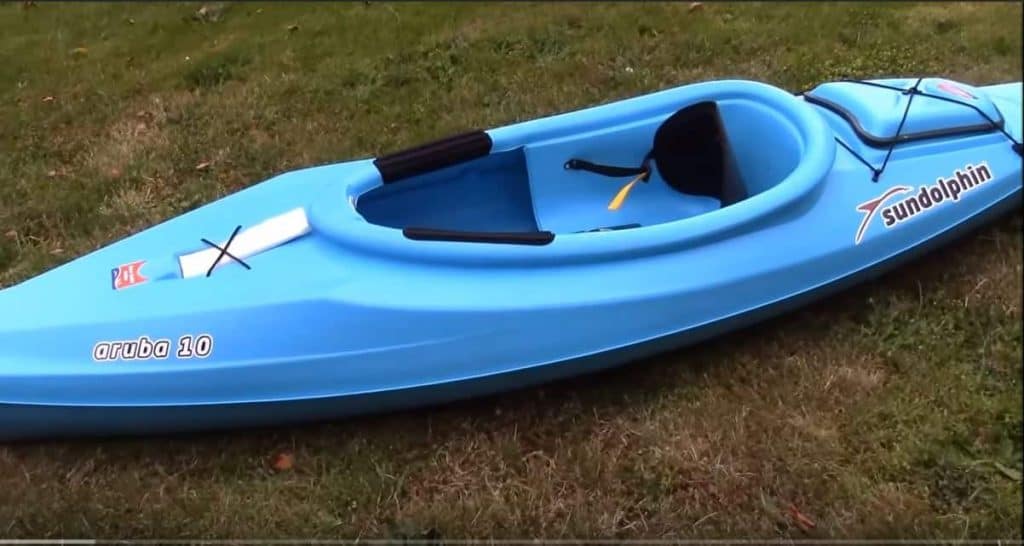 The Aruba 10’s hull is made of a UV-resistant polyethylene. No need to worry about damaging it, scraping against rocks, or getting banged against them; it will pop right back and be no worse for the wear. It weighs in a very manageable 42 pounds, so it’s not too much trouble to lug it to your favorite put-in point.

The Aruba 10’s hull design is classic rec boat, with a very wide cockpit and narrow ends, which gives it pretty good tracking in calm waters. The boat measures 30 inches at its widest point, so it should feel quite stable even for paddlers who haven’t spent a whole lot of time on the water. The downside: due to its wider cockpit it’s more likely to turn sideways in a current. Inside the cockpit is an adjustable padded backrest, though the seat itself is hard plastic. The boat also comes with padded thigh braces and adjustable foot pedals to create a snug fit for paddlers of almost any size. 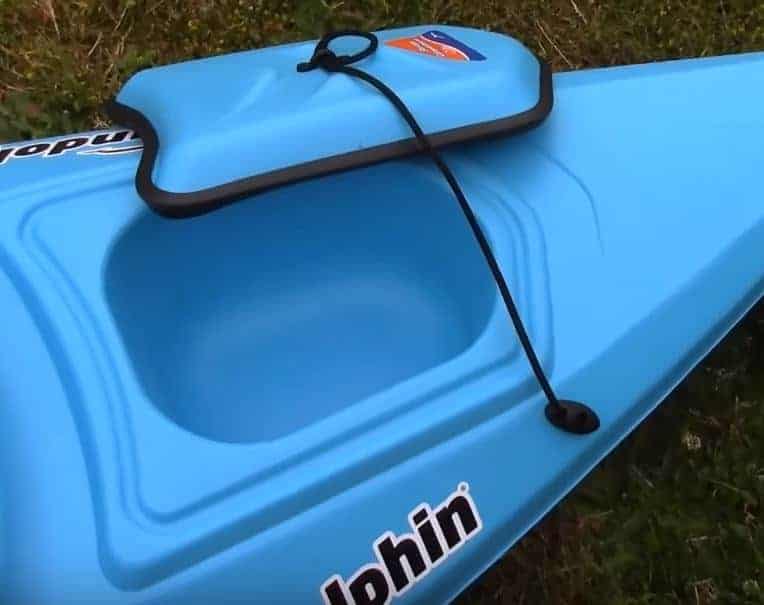 At the rear of the boat is a sizable bulkhead storage compartment. However, the compartment’s cover is held down with shock cord and isn’t the most waterproof. You’ll want to put gear that can’t get wet in dry bag. The kayak’s front deck has an indentation that can hold water bottles, though probably not larger wide-mouth ones.

Of course, price is always a consideration, and the Aruba 10 is  in the lower kayak price range depending on where your purchase it and the retailer’s inventory.

As a recreational kayak, it shouldn’t be taken out into large waves or very fast-moving water. Be sure to understand the limitations of the boat. Its tendency to turn sideways when you’re not paddling (especially in stronger currents) might frustrate paddlers who just want to relax instead of pushing forward.

Whether you’re a first time kayak buyer, a fan of spending days on lazy rivers, or just wanting an inexpensive second boat to bring friends along on your adventures, the Sundolphin Aruba 10 can be a great purchase. It doesn’t really excel at any one thing, but it’s easy to use and will probably get you out on the water more often. Isn’t that the whole point of recreational kayaking, anyway?