In a hurry and just want to find out what the price of the Malibu Two is? Click Here to find out

There’s nothing quite like a day of kayaking: gliding effortlessly through the water, the sun warming your face and the earthy smells of the water wafting through your nose. There’s just one thing that could make that day better, a partner. Someone to share in the experience, and someone who will join you in telling stories that bring envy to those who didn’t spend their day on the water. While most serious paddlers have their own boat, it certainly can pay to have room for a friend who might have the free time, but not the equipment, to join the adventure. For this, you need the tandem kayak, a boat built for two.

The Malibu Two  from Ocean Kayak is a fine example of the kind of boat you need to bring a friend along. It’s lightweight and well built, and most importantly, it’s a tandem kayak that can be piloted even when you have to spend the day by your lonesome.

In this article we tested and reviewed the the Malibu Two and the Malibu Two XL, they are essentially the same kayak but the XL is bigger making it better for carrying more gear. or people!

The Malibu Two is a sit-on-top kayak with a 12-foot length. It’s not particularly long for a tandem and doesn’t have much space for gear, the XL is the better choice if you want to carry more gear and have a higher load capacity. The bow and stern have indention’s that could fit a dry bag, but there’s only minimal deck rigging to hold it all in. However, the boat only weighs 58 pounds and 61 for the XL so it’s not too difficult to carry.

For a sit-on-top kayak, it tracks pretty well and is quite stable as it’s 34 inches at its widest. Going fast probably isn’t going to be a major consideration for buyers of this boat, but with two experienced paddlers, it could get going at a good clip.

This kayak can be converted from a tandem to a solo with fairly minimal effort. There are actually three sets of foot wells in the kayak, meaning a seat can be put in the center of the boat. This makes it much easier to paddle solo.

The Malibu Two’s maximum carrying capacity is 425 lbs which can generally hold two adults, but filling it to capacity will lead to a poor paddling experience. For paddlers who would like to carry more weight, The XL version is one and a half half feet longer and has almost 100 lbs more capacity at 500 lbs 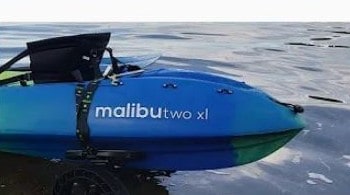 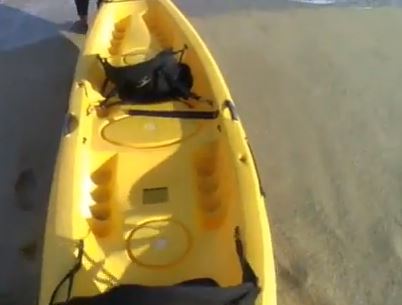 As you can see from this Malibu Two review , it’s a boat that exceeds most of the expectations for a tandem kayak. Converting easily from a tandem to a solo kayak just might be the best feature you could ask for in this kind of boat. Providing a good solo paddling experience makes it less of a specialized piece of equipment and more of an everyday, go-to boat. Its versatility should lead to more time on the water, because paddling is just more fun when you bring a friend.