Crossbow hunting has soared in popularity as more people are discovering just how easy and fun it is. However, it’s important to understand that shooting a crossbow is different than firing a rifle or even a conventional bow, with the experience lying somewhere in between. These crossbow hunting tips will help you to have a more enjoyable and safer experience as you enter this developing sport.

The Most Important Crossbow Hunting Tips

Dry firing a crossbow (or any bow for that matter) can be incredibly dangerous. Without an arrow on the rail, all that tension stored in the limbs has nowhere to go, but back through the bow. It can lead to catastrophic damage and expensive repairs, not to mention bodily harm. Always bring a designated target to fire your last arrow into and put a field tip on so as to not damage one of your broadheads.

This one goes hand in hand with the draw weight tip, but choose a set of heavier arrows for deeper penetration. You’ll need a heavier draw weight to propel these arrows, but their better knockdown power will be noticeable. 300-350 grain arrows should be sufficient, especially with 125 grain broadheads attached to them.

Good Optics Can Make the Hunt

Many crossbows come fitted with at least a rudimentary scope these days, but if you happen to purchase one with iron sights, upgrade to a scope as soon as possible. Most crossbow scopes have a magnification between 1-5x, which should significantly improve your shot placement. Most crossbow scopes have multiple reticles that are dialed in to different distances, which can be calibrated to the specific velocity of your arrows. 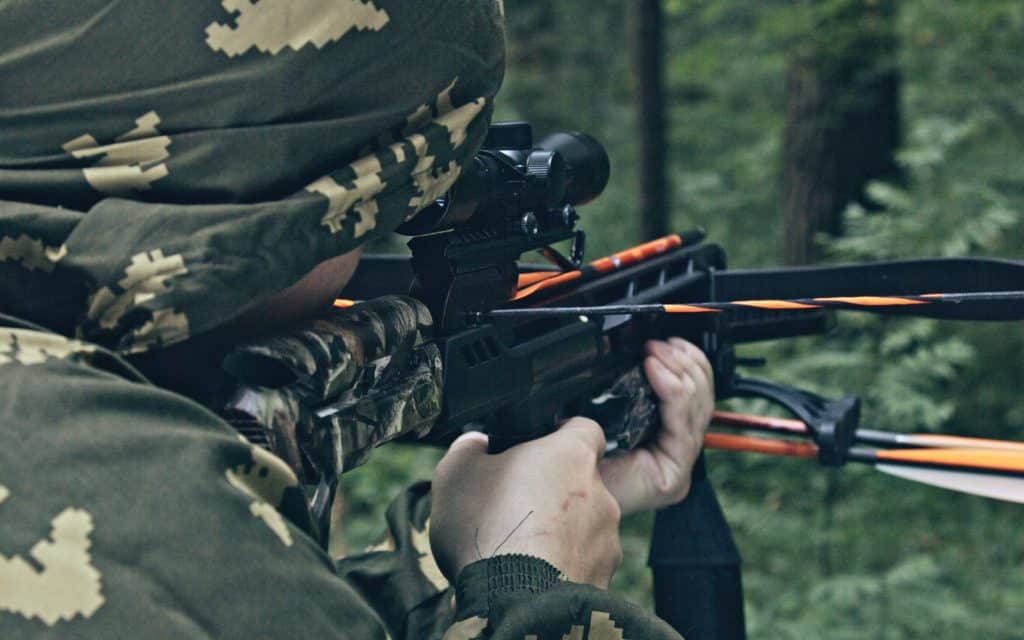 Unlike rifle hunting, there’s a lot of moving parts with a bow and they’re not all confined to a small area like the enclosed chamber of a gun. Think about where your finger placement at all times. Are they anywhere near the bowstring? If so, you’re at risk of seeing them being sliced off. Also, before firing the bow, look to see if there’s any obstructions near the limbs. This is especially important if you’re using a recurve setup, where the limbs have a lot more travel. A treestand can get pretty cramped, but for safety’s sake, do a quick check before you take a shot to make sure there’s nothing that could get in the path of the limbs or bowstring.

This tip with be familiar to anyone that’s done some bowhunting – it’s imperative that you know how far away your target is. Shooting a crossbow is not like shooting a rifle, the arrow drops further and slows down faster than a bullet does over an equivalent distance. When crossbow hunting, your rangefinder is going to be your best friend. Avoid taking shots at targets further away than 40 yards; any more and you’re looking at bad shot placement and poor penetration, both of which lead to a wounded animal that may not be recoverable.

If you’ve ever been crossbow hunting, you know that they weigh a lot more than a conventional bow (typically twice as much). Carrying that bulky weapon for several miles and then climbing into a treestand is exhausting, so be sure to have a good, long rest before you take any shots. An inaccurate shot can lead to a lightly wounded animal that will travel further, meaning hours of tracking that will sap your energy even further.

A Few Minutes of Maintenance Prevents a Day of Trouble Later

The bowstring of a crossbow directly contacts the rail, which means it wears down faster than the string on a conventional bow. You’ll know that the string needs to be replaced when you start to see little fibers popping out from it. You’ll also want to lubricate the bowstring and the rail periodically to keep it in tip-top condition, and prevent the bowstring from wearing out even quicker.

Nobody’s perfect their first time out, and if your hunting trips are the only time you fire your crossbow, you’ll never get proficient. Spend some time at the range and get comfortable with your weapon and your preferred arrows (and heads). If you have the space for it, practice some real world scenarios like the high angle shots you would take from a tree stand of the sitting position used with a ground blind.