Learning how to use a game calls to get more kills is one of the most important skills you can have as a hunter. Without game calls you are forced to wait for the game to come to you, a boring and wholly unsatisfying fate. But with them, you control the movements of your prey and are able to set them up in the perfect position to make the kill shot.

There are so many great types of calls, but we’re going to cover just five of them: grunts, rattles, electronic, peg & pot, and diaphragms. Each of them requires some skill to get good with, so the most important piece of advice is that you practice, practice, practice.

Grunt calls are one of the most familiar types of game calls, even to newbie big buck hunters – you blow in them and they make the sound of an aggressive buck. A grunt is sure to bring in other bucks that might want to challenge someone who thinks they’re the alpha male. They’re great for the pre-rut period when the social hierarchy is being established.

Don’t worry about overusing your grunt call; if there’s a buck in the area, feel free to let loose every twenty minutes or so. On the other hand, if you’re unsure of what’s in the area, putting out too many calls can be a problem. A doe might come towards you and get spooked when she notices you. Only call repeatedly when you know a big buck might be nearby.

Get Loud During the Rut

The rut is a time of peak mate competition, so you’ll want to make yourself sound like the most intimidating rival. Short, loud, and rapid grunts will sound aggressive and should bring in plenty of big bucks.

Only Grunt From a Distance

Once the buck is close enough to see you, it’s time to lay off the grunt. If he’s close enough to where he should be able to spot his rival, a grunt will just lead to confusion and suspicion. He’ll most likely hightail it out of the area in response.

Rattling antlers are some of the easiest game calls to use when it comes to bringing in the bucks. Originally just a pair of antlers knocked together, synthetic versions now provide a more compact call that make a ton of noise for their size. The sound of rattling antlers suggests two males are fighting and attracts the attention of other males who would seek to usurp their mates. 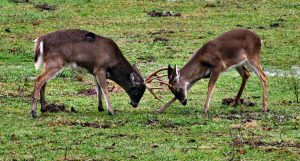 For the first fifteen minutes or so, rattle your antlers together fairly quietly, building in volume over time. Once you’ve gotten them fairly loud and are sure no bucks are in range, wait for twenty minutes or so. This will give the buck some time to wander towards you.

Be Aware of Wind Direction

Bucks prefer to approach a fight from the downwind side, so be aware of where your scent is going. Not even the sound of rival males fighting is going to bring him to an area that reeks of human.

These are arguable the easiest calls to use, but also the easiest to misuse. Electronic game calls can reproduce dozens of different sounds from a variety of preys. For novice hunters that aren’t confident using a call, they’re a great choice because they work at the push of a button. However, that doesn’t mean that there’s not a right and wrong way to use them.

Don’t Go Crazy with It

Just because you have access to dozens of calls doesn’t mean you can use them all at once. You need to have a cohesive strategy that sounds natural. Just like with any other type of call, consider what sounds you should make when your prey is far away, up close, with females, etc.

This is one of the best things about owning an electronic call, you can preprogram it to emit a series of calls in an order that is sure to attract nearby prey. Like I said above, you need to make it sound natural, but being able to program your calls is so much nicer than trying to pull out several manual calls to get the same sequence.

Peg and pot calls can be a bit challenging to use, but for turkey hunters that know what they’re doing, they are invaluable. They work by rubbing a small peg across a glass, slate or aluminum surface to create create the clucks and screeches of a turkey. It’s a really simple design, but they can take quite a bit of practice to get good with. 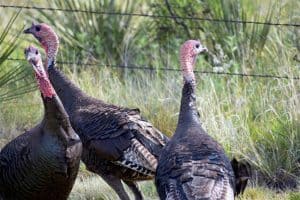 Hold the Call Away From Your Body

So many hunters make the mistake of holding the call so close to their body that it mutes most of the sound. It might not be as comfortable, but stretch out your arms a bit so the call can emit in all directions with the same volume.

Rough Up the Call’s Surface

These types of game calls are most effective when their surface is rough. Many of the calls require that the peg skip across the surface, which won’t work if you’re rubbed it smooth. Rub it a few times with a piece of sandpaper to get it back to its original condition. This is especially important if you’re doing a lot of practice at home and smoothing out the surface of the call.

These are some of the most tricky turkey calls to use and probably should be saved until you have some experience with a few others. While they might seem similar to other calls that you blow into, they’re more akin to a musical instrument in their complexity of use. Once your ready though, diaphragm calls can be incredibly effective when used correctly and at the right time.

Get It Deep in Your Mouth

Diaphragm calls are meant to be placed towards the middle of your tongue, but many novices feel more comfortable holding it with the tip instead. This is a mistake as you won’t be able to make the right notes.

Wait Between Your Clucks

Rapid fire clucking isn’t going to sound very natural, put a few seconds between each one and get a rhythm going. Keep your notes consistent too as a change in pitch could signal a change in mood for the bird.

Diaphragms, more so than any other type of call, require practice. Watch YouTube videos and read about the words that more advanced callers mouth to get the notes to come out right. It takes time and a lot of practice, just like learning a new instrument.