More than anything else, wearing camouflage identifies you as a hunter (or military). Its goal: allow you to move through the forest undetected by your prey. Obviously you can go hunting without wearing camouflage, hunters have done in for millennia. However, when used effectively, camouflage can significantly improve your chances of filling your tags.

The type of camouflage needed will depend on the animal your hunting and the environment you’re hunting it in. Below you’ll find the different categories of camouflage and when they are best used. No matter how good your camouflage, no design will work well in every situation though; you’ll most likely need to buy multiple sets if you’re hunting in different areas.

The RealTree pattern is a perfect example of this – it has large leaves and sticks printed on the fabric. Its purpose is to faithfully replicate the environment that you’re hunting in.

Mimicry camouflage has a limited timeframe for when it’s effective – go too late in the season and those golden yellow leaves on your jacket will look out of place amongst the barren trees. Mimicry camouflage is best used in areas that have relatively stable weather, the Southeastern United States being a good example. If the forest’s appearance changes drastically throughout the season, you’ll probably want to go with a different type of camouflage.

This is the type that comes to mind when most people think about camouflage. Its goal isn’t to look identical to your surroundings, but rather to break up the outline and solid colors associating with a human figure. It’s also the type of camouflage used for military fatigues. The modern “digital pattern” that soldiers wear looks nothing like something you’d find in nature, but it excels at breaking up the human form.

Breakup Camouflage is great for any hunting trip. You’re not trying to blend in like a chameleon against a tree, you’re just hoping that the deer’s eyes will pass over you as the scans the forest.  For this reason, breakup camouflage is great for hunting New England and the Rockies, where the forest can look quite different from month to month.

Originally designed as a mobile hunting blind, the full-body ghillie suits you see snipers wearing in the movies are a perfect, albeit it extreme example of three-dimensional camouflage. Most hunters utilize 3-D camouflage in much more subtle ways, by tucking a few leafy twigs into their hat band or wearing a face mask to break up their outline during turkey season. 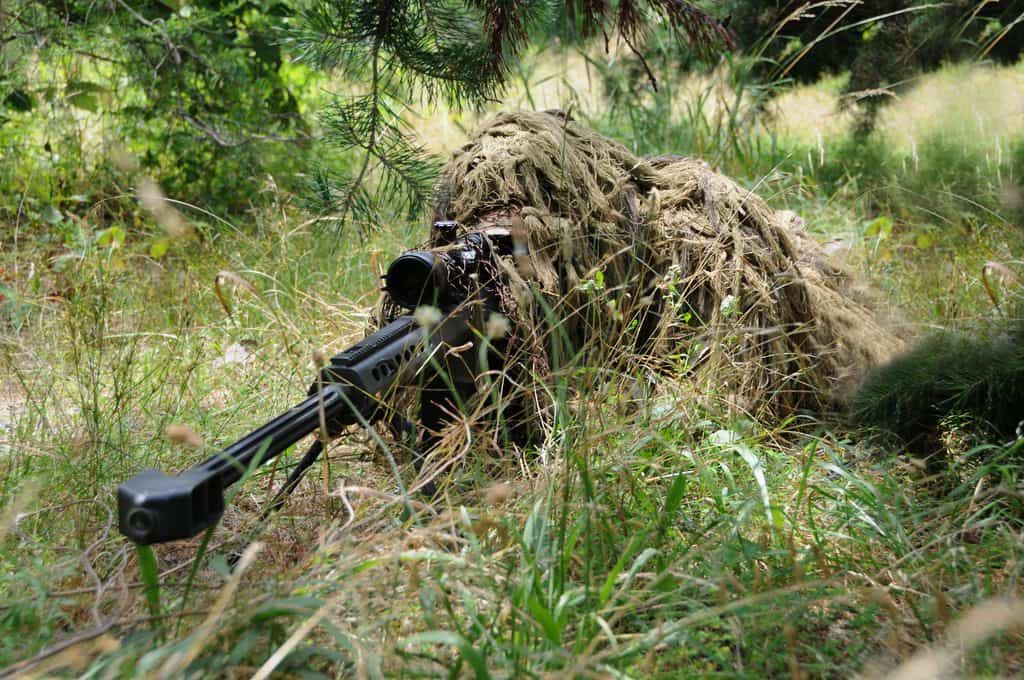 There’s no definitive answer for this one. It’s probably never a bad idea to add a little 3-D camouflage to your hat or blind, but you don’t want to go overboard with it. Ghillie suits are hard to move in and get snagged on branches; keep your 3-D camo light and fairly subtle if you want to stay hidden and mobile. When done properly, this type of camouflage is highly effective.

Nothing says “going hunting” like throwing on a little face paint before you head out. Face paint breaks up the outline of your big, round face, which is the only thing that most animals will see once you have your camouflage jacket and pants on. Face paints come in several earth-toned colors, and you can mix and match them or just do some simple designs in one color.

A simple face paint pattern is never a bad idea. Without it, your solidly-toned face will stick out like a sore thumb amidst the intricate leaf and branch patterns you’re trying to blend in with. You don’t want to go overboard with it though; you could spend an hour trying to recreate the Real-Tree pattern on your face, but all you really need is some well placed lines to break up the solid color.

One disadvantage to face paint is that some brands can be difficult to remove at the end of the day. Check reviews carefully and make sure it’s not a greasy formula that will require a full shower to take off.

Does Camouflage Even Matter If I’m Wearing Blaze Orange?

Absolutely! While humans can see an array of colors, with blaze orange being more visible to us than any just about other color, deer simply see shades of grey. Wearing a solid blaze orange vest will still stand out because it lacks the patterns that you would see in nature. However, most states allow “camouflage orange” –  a vest or jacket that has some black patterns on it to break up the solid orange color.

Turkeys and other animals (particularly predators) are a different story. They can see color and they have excellent vision. When hunting them, you won’t be wearing blaze orange and you’ll want to be more careful about your camouflage choices.