In a hurry and just want to find out what the best kayak carrier is? After our  thorough testing and research we highly recommend the Malone Downloader J Folding Kayak Carrier as the best by far.

Unless your house is equipped with a dock, taking up kayaking means you’re going to need a roof rack for your vehicle. Even if you own a pick-up truck, a rack (or extensive tie-down system) is necessary for all but the shortest boats.

Kayakers who paddle infrequently can get away with some using some foam blocks and rope to mount their boat on their car. But that ends up being more work than it’s worth if you want to get in your boat more than once a week or so. Purchasing one can be a challenge though, as they’re expensive and there’s a plethora of different setups to choose from. But buying the right rack will make preparing for a kayak trip much easier and more enjoyable.

There are three major types of kayak carriers: saddles, J-cradles, and stackers. Each one holds the boat in a different position and has some advantages and disadvantages in setup and use. 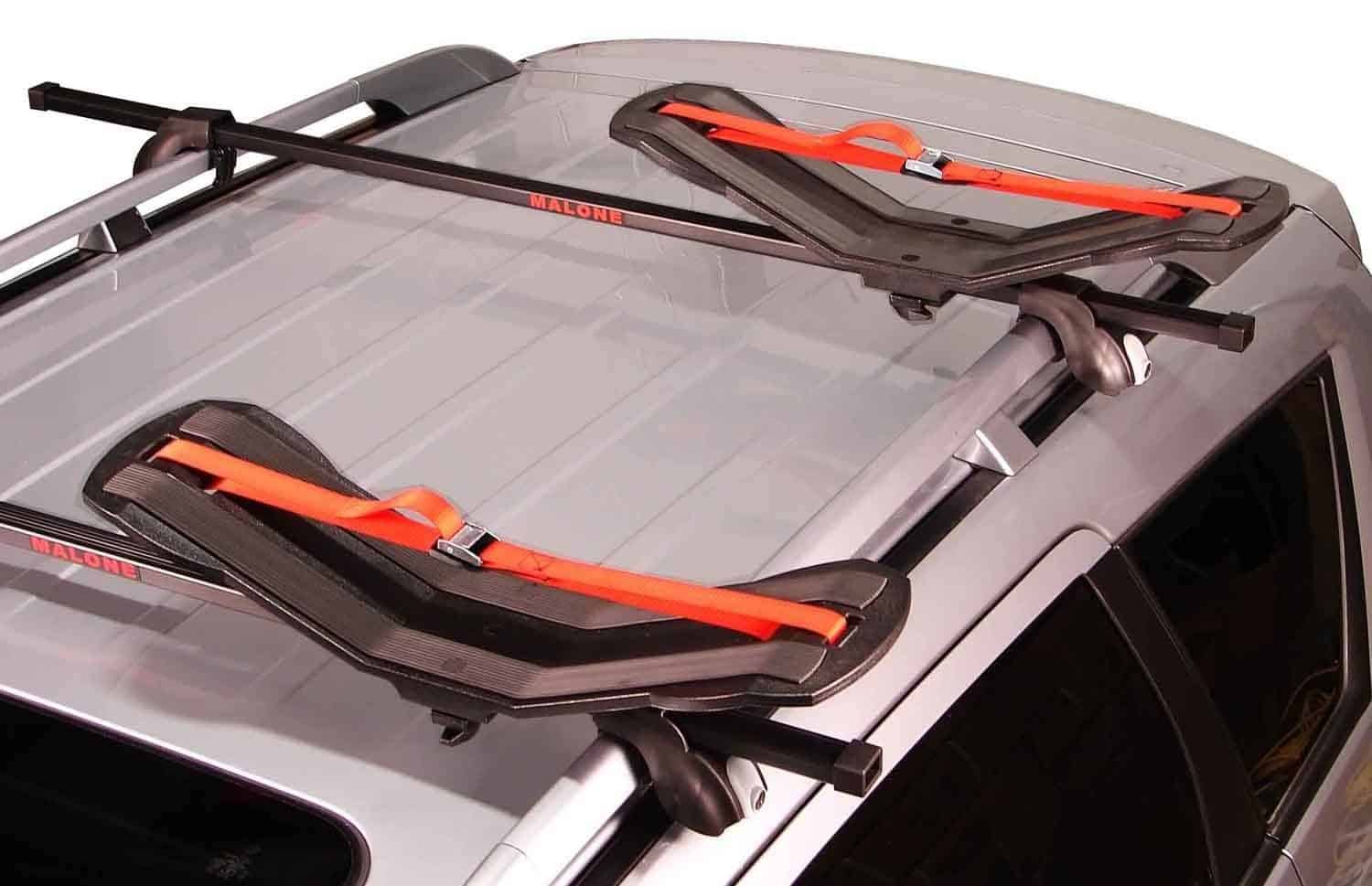 Saddles hold the kayak horizontally, so the boat’s hull is parallel to the vehicle’s roofline. This is the most secure setup because the boat has a lot of surface area touching the carrier, and it’s in an aerodynamically favorable position – it’s cutting through the air just as it would cut through the water. Kayakers love saddle carriers because they’re the easiest type of rack to use; just tip the kayak onto the rear of the saddle and then push it forward. The downside is that the kayak takes up more roof space sitting horizontally, so it can be difficult to fit two boats, especially on a smaller vehicle.

J-cradles hold the boat at a 45-degree angle. The cradle still has a lot of surface area touching the hull of the boat, but it takes up less space by holding the boat at an angle. Their disadvantage is two-fold. The position is not as aerodynamic as the saddle’s, which affects your vehicle’s fuel economy, and it takes more effort to get a boat onto the roof, because you have to lift it perpendicular to and above the height of the roof. You need to purchase two sets to carry two kayaks, this is the best way we know how to strap 2 kayaks to a roof rack 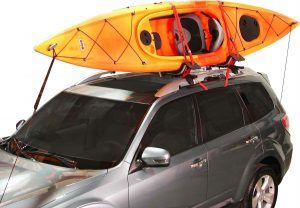 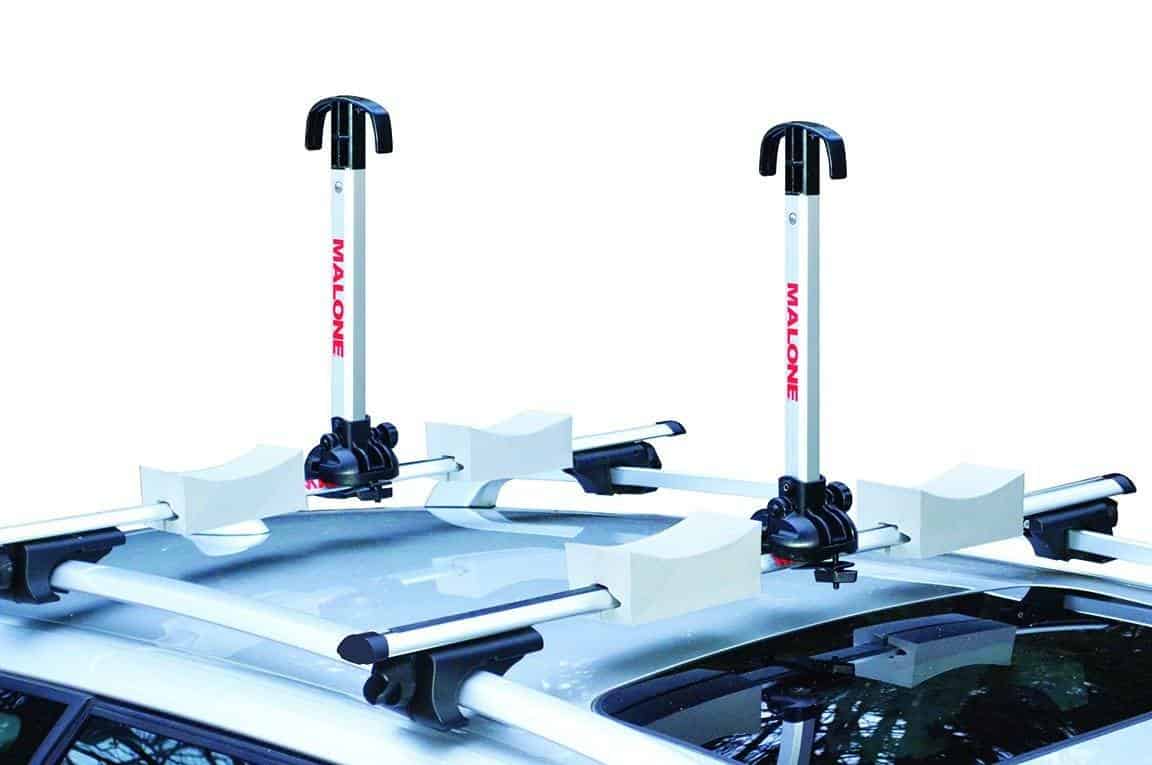 The last method for carrying a kayak is the stacker, and should only be used when you need to carry more than two boats. The carriers are just posts mounted on the crossbars that can have a strap looped around them and the kayaks. The boats are carried in a vertical position, so very little of the carrier’s surface touches them. It’s also necessary to install padding on the crossbars to give them enough friction to hold the boats. This design is also the most difficult set up, as it doesn’t hold the kayaks well while you’re tying them down. It’s also not very aerodynamic.

While Yakima and Thule have tried to differentiate their incredibly similar racks by using differently shaped crossbars, the Malone J-cradle fits both. You’re not locked into one company’s system with them.

Thule and Yakima have created a duopoly in the roof rack market. Once you decide to buy one product from either company, you’re also stuck with their system of crossbars, roof clips, and towers. There’s a forced brand loyalty, making you either a Yakima user or a Thule user, presumably for the life of your vehicle.

The Malone Downloader utilizes the J-cradle design, which is hard to beat if you’re carrying two kayaks. While it might cost you a few miles per gallon in fuel economy compared to the saddle design, it more than makes up for it with the flexibility to carry wider boats. 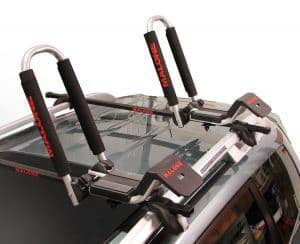 Malone Downloader bracket in the up kayak carrying position 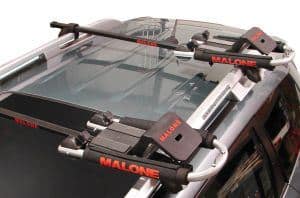 Malone Downloader bracket in the down not in use position

When you’re not using them, the cradles also fold down to lessen their wind resistance and improve your gas mileage. This is a lot nicer than having to take them on and off the crossbars each time you want to use them.

The tips of the J-cradles have a piece of downward-angled plastic that serves as a loading ramp, so you don’t have to lift the boat up and over the cradle to get it into position. This is a big improvement over other cradles and helps overcome one of the biggest disadvantages of their design.

The Malone Downloader also comes with bow and stern lines, which improve the rack’s stability by attaching to the front and rear of your vehicle. While these might only be necessary if you’re taking a lengthy trip on the highway or have an especially long boat like a tandem kayak, it’s one more piece of extra equipment that you won’t need to buy.

It’s hard to beat the Malone Download’s price, which is usually equal to or less than that of a Thule or Yakima Carrier. The Download also comes with more features than most of its competitors: it folds down, uses a loading ramp, and comes with bow and stern lines. This makes it the best choice for kayakers who want to carry two boats, hassle-free, on top of their vehicle. When you get to your destination you then need a kayak cart to transport your kayak to the water, this rack pairs well with the malone nomad

Top Outdoor Activities You Should Definitely Try Out

How to Carry a Rifle While Hunting?

Tips for Shooting Your AR15 with Iron Sights

Duck vs. Goose Meat: Why One May Be More Preferred Than the Other

How to Choose Crossbow Bolts

Essential Equipment for a Night Hunt