Crossbows are becoming more popular, both for hunting and target practice. With the rising popularity comes a wider range of top crossbows available on the market. Some people are switching for bow hunting to crossbow hunting.

First is the draw weight of the bow. A Higher draw weight means two things – it is more difficult to draw the string and the arrow is more deadly.

Other important factors of a hunting crossbow are the velocity of the arrow, the power stroke and energy output of the bow.

The velocity, measured in feet per second (fps) is important to avoid the arrow slowing down drastically as it approaches the target.

Generally, a minimum draw weight of 150 pounds with a velocity of 200 fps describes a good general-purpose c﻿﻿﻿﻿ros﻿﻿﻿﻿sbow that can be used for hunting.

So What is the Best Crossbow for Hunting?

Any enthusiast can name several different crossbows. As well as our own testing we’ve gone through dozens of reviews and found five crossbows with consistently good ratings that should be considered as the best hunting crossbows. We think these five are leaders in terms of construction, performance and price.

What do These Crossbows Have in Common?

The fps should be high enough to make your shots deadly at up to 40 yards. An fps of 200 is the lowest velocity that is acceptable; 300 fps is a much better choice. Your crossbow should be easy to carry. Space is tight in a tree stand and you may have to walk for hours to get to your favorite hunting ground. You’ll need a dependable scope, although you can always upgrade later. Your crossbow must be smooth and quiet in its operation to avoid startling or scaring your prey.

All things considered, which did we think should be seen as the best hunting crossbow? 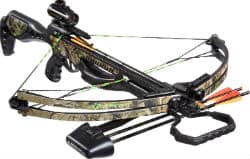 This is possibly the best crossbow for someone just starting out and looking for an affordable entry point into the sport. This is a high value, powerful compound crossbow. The “off the shelf” package is ready to go after some assembly and the bow itself is adequate in all states for any legal game. The military style stock is comfortable and light, at 7.7lbs, and an automated safety engages when the xbow is cocked, it also prevents dry firing. (Dry firing is pulling the bowstring back and then releasing it without an arrow.) It has a nice crisp 3.5lb trigger pull that is smooth in its operation. 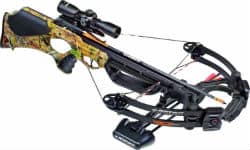 The weight is distributed so that most of it is on your shoulder. You do not experience front-end heaviness as you would with other crossbows. With a 185-pound draw weight and a blazing speed of 365 fps, this bow is suitable for any size game. It is recommended that this unit be stored in climate-controlled conditions and the string be waxed after every 10 shots. 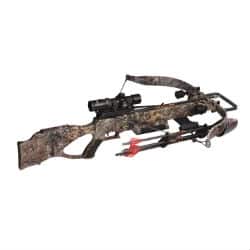 This crossbow is a popular choice in its price range. Its ergonomically designed handle is easy to grip and the bow is well-balanced overall. It is quite a low maintenance bow and heavy duty, it’ll still fire well after taking a battering.

With its draw weight of 260 pounds, an arrow velocity of 380 fps, the crossbow is consistently accurate and deadly, even at distances approaching 70 yards the arrows stay on target and remain powerful enough to take down a buck. This is a crossbow designed with the hunter in mind, yet it is still suitable for target practice. 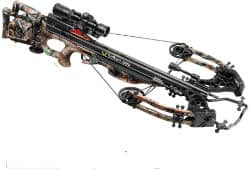 This crossbow weighs 6.8 pounds and is one of most accurate and efficient models available. It has a draw weight of 165 pounds and shots from this unit are 360 fps. The crossbow comes with the scope already mounted and sighted but I found it to be out by about 10 inches. Assembly takes about 15-30 minutes depending on your experience but it’s not too difficult.

The Vapor sits at the high end of the market in terms of price, but you know what they say “buy cheap, buy twice”, if you splash out on this xbow it will be a bow for life.

The draw weight on this crossbow is 185 pounds, with an arrow speed of 370 fps. It is delivered as a complete unit, is easy to cock, due to the accudraw crank, and is highly accurate. This high-end unit is a prime example of quality performance. If there is a drawback to this bow it is the price point, but when you start shooting it you understand the quality craftsmanship that went into its creation making it a high end xbow. Also being made in america means they paid more for labour to get a better job done.

All in all, there’s a lot to consider when choosing your own crossbow for hunting. In addition, you must be aware of the regulations covering hunting seasons and equipment for the state or states where you will be hunting. You must also consider your size, strength and skill level.

Whatever crossbow you choose, make sure you maintain your equipment, like you would your hunting knife,  and follow safe hunting practices. Crossbow hunting is a good way to spend some enjoyable time in the great outdoors.