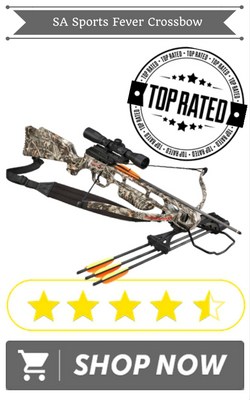 So, you’re in the market for a cheap crossbow? The good news is you don’t need to break the bank for a high performing crossbow kit.

In this article we will be looking for the best cheap crossbow for hunting or target practice. While budget crossbows many not have the features, materials or power of their more-expensive counterparts, all of the bows listed below are solid performers and effective for hunting at ranges of 20 to 50 yards. All of the crossbows can be found for less than $200, making them a minimal investment for new or experienced shooters. 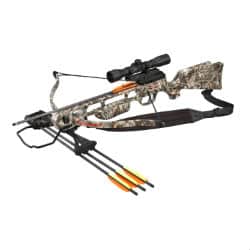 At around $125 you can find cheaper crossbow kits, but with the ability to shoot a bolt accurately at 250 feet per second, this crossbow has enough power to take down a deer at short to middle distances.

For the price, this crossbow has a host of features including a scope attached to a weaver mount, 4 arrow quiver and an attractive camo pattern. Bought separately, the components of this crossbow would amount to much more than the asking price, and the included scope offers a level of precision you won’t find with a cheaper red dot scope.

With its ample features, excellent performance in short to middle distance and a seriously good price, the Jaguar the SA Sports Fever Crossbow Package makes an excellent choice for a budget crossbow. 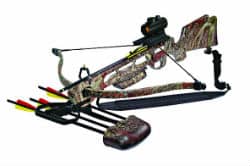 What makes the Inferno Fury the best budget crossbow is how lightweight and compact it is, meaning it’s the perfect crossbow to take into the woods on a hunt. Overall, it has a solid and well-constructed feel, and even experienced hunters use this crossbow because of its light weight and performance for middle-distance deer hunting. 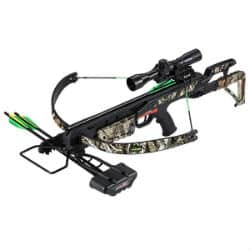 A stand-out feature of the Empire Terminator is how it can be personalized. The front grip can be removed to give access to Picatinny rail for mounting a foregrip or flashlight and the rear stock is adjustable so it can be dialed in for comfort and mechanics.

Users are commenting that this crossbow functions better than some higher-end crossbow kits, and it’s my personal favorite budget crossbow. The performance is excellent and the looks make it stand out.

For around $110, you won’t find a cheaper crossbow than the Jaguar CR-013 Series Crossbow Kit.

For this very inexpensive price you will be getting a crossbow with modern features such as a mounted red dot scope, six bolt quiver and a very comfortable stock. This crossbow is surprisingly accurate and stable, especially considering the budget price. The bow does tend to be noisy, but there are kits that can dampen the bow noise.

Another item of note though is that this kit does not come with a cocking device, and I would recommend buying one separately. The cocking device will help lessen the perceived tension when pulling back the string. Even with a few detractions, this crossbow is the best cheap crossbow because of its surprisingly good accuracy and stability. 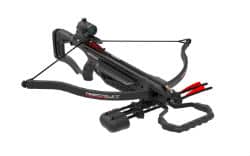 Barnett is a well-known crossbow manufacturer, and the Recruit is their offering to the budget market.

The Recruit offers similar features to the other best cheap crossbows, with an included red dot scope, 2 bolt quiver and cocking device. The stock has a very attractive tactical look to it with an ergonomic grip and Picatinny rail.

So why the budget price? The performance isn’t as good as the offerings from SA Sports with 245 feet per second coming from a 150 lb. draw weight and the accuracy, while good, lags behind the competition. But, for a price of around $150 you’re getting an attractive crossbow made by a company that produces very good higher-end products.

As you can see from these five examples, buying a crossbow on a budget doesn’t have to be a daunting task. Competition in the market means that quality materials, useful features and impressive performance doesn’t have to cost Rolls Royce money, If you still struggle to afford one of the above crossbows then your only other option is to invest in one of the best pistol crossbows, these are smaller and cheaper but not as good as full size crossbows. Because of the features and performance, these examples make a great choice.