Reviewing The Barnett Raptor Was A Blast, Scroll Down To Check Out What I Thought About It

If you have been in the game long enough, you know that Barnett is among the major players when it comes to production of high performance crossbows. The company does not deviate from its culture of high innovation with its latest installment, the Barnett Raptor Pro STR Crossbow in Realtree Camo. Speed, precision, quieter shots and a compact ergonomic design are just but a few of the great features you will enjoy from this crossbow. 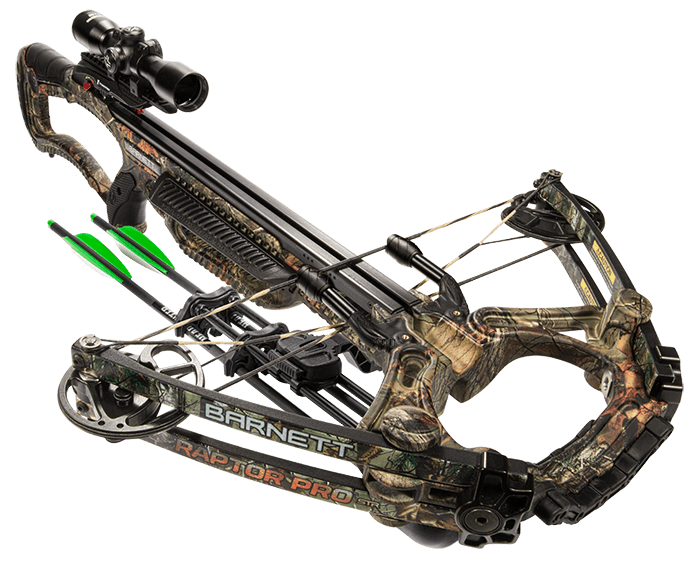 The Barnett Raptor Pro is one of the best performing crossbows with a Barnett name attached to it. Although it is not a flagship crossbow like the Barnett Predator it ranks above the Whitetail Hunter II, it includes the same features found in the high end models like high speed, extra muscle, high draw weight, beautiful ergonomic design, a quiver, string dampeners and anti-dry trigger system. The Raptor Pro is definitely a keeper and will work perfectly for you if you love long range shooting. Here are the great features of the Barnett Raptor Pro STR Crossbow (BAR78005).

The Top Notch Features Of This Crossbow

The first thing you notice about this crossbow is its beautiful design.  It is clad with the Realtree Xtra color/pattern that really blends in with the forest cover to give you the needed camouflage to close in on the target. It is quite big measuring 36.5”L x 20”W and only weighs 6.9lbs. The low weight coupled with the pulley system that reduces the length of the bow arms makes maneuverability a stress-free affair.

There are three factors that determine the performance of a crossbow: speed, kinetic energy, draw weight and power stroke. At 400FPS, the Raptor Pro is one of the fastest bolt shooters in the market. With such a speed, you can hit your target right before it dashes off. However, speed without power will do very little damage to the game. This crossbow includes enough power to kill the target humanely or instantly, a rarity at that price range.

Going hand-in-hand with the high speed is 135ft. lbs. Kinetic Energy, 16.25in Power Stroke and 187lbs. Draw Weight. Compared to a flagship crossbow like the Barnett Predator which has 430fps speed, 187lbs draw weight, 16.25 inch power stroke and 156 ft-lbs. kinetic energy, the Raptor Pro is really not that much different considering that it is far more cheaper than the Predator.

This patented TriggerTech Frictionless Release Technology includes a free-floating roller that is etched between the sear and latch. The result is a zero-creep, 3 pound trigger system that allows you to make a shot without any hurdles. The technology also incorporates anti-dry fire with nock sensors that prevent instances of dry firing, which lengthens the lifespan of the crossbow and also prevents accidents.

At 187lbs. of draw weight, snapping the rope can be a tricky affair for many people. Luckily, the Raptor Pro comes with a rope cocking device that completely lightens the process. The unique step through riser doubles as a foot stirrup during rope cocking. As a result it is more compact and lighter to carry and handle. The lightweight design of the STR technology also prevents weight shifting to the front during operation allowing for stability and easy control to make the perfect shot.

With such power, production of high noise is inevitable. It is due to this reason that the Raptor Pro also includes string dampeners. Attached to both sides of the string, the dampeners absorb the noise and vibrations of the string allowing for a soundless shot. This is very important if you are looking to make several shots without alerting the game.

The Raptor Pro is a great crossbow that receives a ton of praise from many crossbow shooters. Many of them opt to give it a perfect 5-star rating from the sheer experience of using it. However, as a reviewer I would be considered biased if I overlooked some of its flaws and give it a five star rating. Even the Barnett Predator has its own share of flaws, although I put it above the rest. Here are some of the customer testimonies:

My Overall Impression Of The Barnett Raptor Pro STR

The Barnett Raptor Pro is a mid-level crossbow that really performs far beyond expectation. It incorporates most of the features of high end models, such as high speed, long range shooting, extreme power to put down any game and most importantly precision even at long distances. It is also customizable thanks to the picatinny rail that allows you to install whichever accessories you want. The safety measures puts it among the safest crossbows, while the rope cocking device makes it user friendly to almost all demographics of shooters. Why waste money on a high end model when you can get the same features and performance from this crossbow? The Barnett Raptor Pro will definitely give you bang for your buck.