Before you read on, please be aware that AR does not stand for Assault Rifle, as it is often said. It is simply a short form of ‘Armalite’, the original manufacturer of both the AR-10 and AR-15. Now that you know, please continue reading!
Similarities
We’ll start with some similarities first. Both assault rifles were designed by Eugene Stoner and made by Armalite for warfare. Both were also fully-automatic and semi-automatic. Currently, both rifles are still available today from various manufacturers such as Aero, Daniel Defense, and Colt. The latter is the original mass-producer of the AR-15 and still makes modern variants.

The same trigger group, general design, direct impingement gas system, and make are used in both rifles. Modern variants and makes can range from simple to having rail systems, particularly sights and foregrips. Here is a selection of higher-quality scopes if you wish to look for one.

Eugene Stoner first designed the AR-10 before the Vietnamese jungle called for a smaller rifle. It was chambered in 7.62x54mm NATO/.308 Winchester. The large round had a lot of stopping power but was heavy. A bigger cartridge also meant that the magazine capacity was lower. The AR-10’s effective range is about 600m as the 7.62mm NATO round is large and propel can the bullet across a longer distance. This combined with the AR-10’s design allows it to achieve a muzzle velocity of 820m/s. Bear in mind that this refers to the original AR-10.

Today, AR-10s are still made but can be chambered in calibres such as .300 Winchester Short Mag, .338 Federal, and 6.5mm Creedmoor, as seen here. The newer processes and materials allow for stronger construction, powerful chamberings, and adding various accessories. From optics to foregrips to laser sights, AR-10s can accommodate many more as long as the tactical rail or accessory mount can hold them. The AR-10 is mostly a battle rifle, designated marksman rifle, or sniper rifle today. This change in function allows marksmen to make the most use out of the calibres AR-10s are often chambered in. Range and stopping power are AR-10’s strong points. 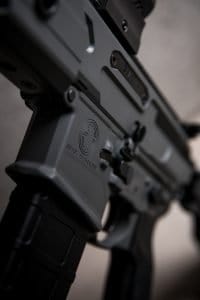 The AR-15 is the response to the Vietnamese guerrillas’ AK-47s, which were able to pour fire into the jungle easily. Stoner and an Armalite engineer by the name of Jim Sullivan improved upon the original AR-10 design. Chambered in 5.56x45mm NATO, the AR-15, known as the M16 later on, was a lightweight rifle that fired lighter cartridges. Infantrymen can now carry more and higher capacity magazines on them and lay suppressing fire in the jungle. The AR-15’s range is around 500m due to the smaller cartridge. However, it has a higher muzzle velocity of 960m/s, this measurement belonging to the M855A1 round first introduced in 2010. The M193 variant could achieve 991m/s and was the first 5.56mm NATO round used in Vietnam.

In modern times, a variety of cartridges can fit the AR-15 platform, even pistol rounds and incredulously, the .50 BMG. This makes the line between the AR-10 and AR-15 blurry, but that is another topic for another time. The norm for modern AR-15s is that the rounds it can fire are often light and high-velocity, similar to the original 5.56mm NATO chambering. Examples are .300 Blackout, 6.8mm SPC, or .50 Beowulf, among many others. This makes the AR-15 a versatile platform in terms of cartridges. It is also able to accommodate accessories like the AR-10 since modularity is a major requirement in modern warfare.

From what we can see above, the AR-10 is mostly chambered for larger cartridges, heavier, and is often used as a long-range weapon in these days. It is also an older design originally, updated for modern times. In contrast, the AR-15 is a newer design, mostly an assault rifle, and mostly seen with smaller calibres. The AR-15 is much more modular, and it can encompass AR-10s today because AR-10s are a much more specific designation. As a whole, you would use an AR-10 for long-range marksmanship, while AR-15s excel in short- to medium-range combat and shooting. This is apparent in many AR-10s’ longer barrels, and AR-15s coming in barrels measuring from only a few inches. 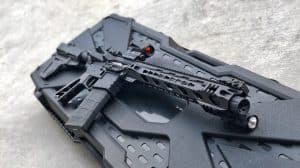 In short, the differences between the two rifles lie in calibre, range, and role in combat. The AR-10 is great for longer ranges while AR-15s can do all ranges but excel in shorter ranges depending on calibre. We hope you enjoyed this article detailing how the AR-10 and AR-15 are different.